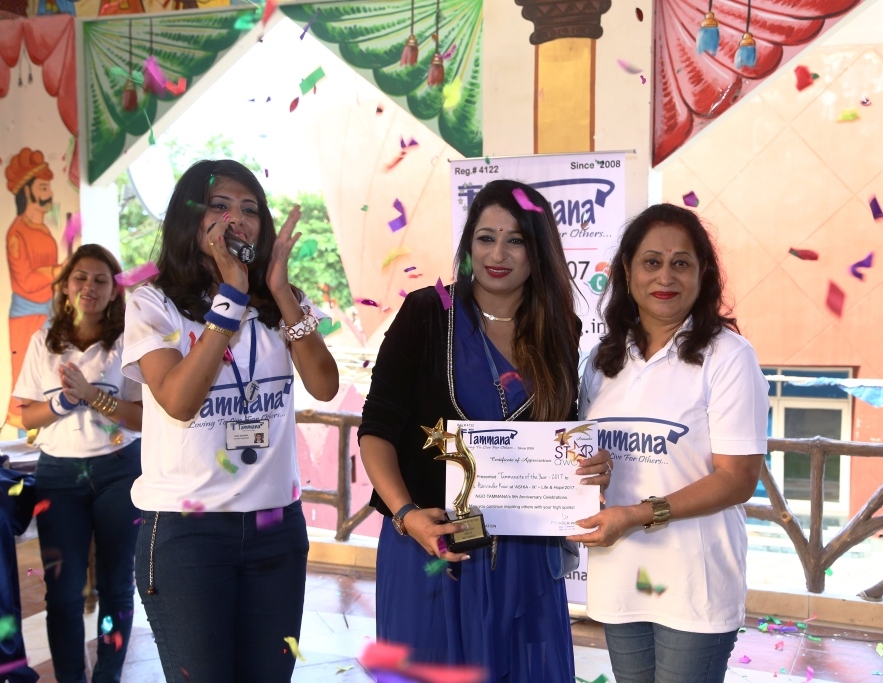 The Tricity based NGO Tammana, completed its 9 glorious years of serving the society on September 1st. Since its inception in the year ‘2008,it has been not doing great things but little things with great love.

This State Awarded NGO of over 65+ volunteers from various fields & backgrounds works consistently for the welfare of the society where itfocuses on health & education, empowering women, environmental concerns and also varies a wide scope of other social causes too. 260+ children, so far, from the slums & those begging at light points have been introduced to the basic need of education & effectively admitted to schools under various initiatives by Tammana. The assistance provided is non-monetary & its modus operandi involves collection & distribution in-kind which is indeed making it stand different & tall. Tammana’s association with 65+ reputed organisations & its social media functioning is a significant aspect that further aids in the efforts being more widespread. Running on No-Profit Basis, it has been in news time to time for various achievements in its field. Very youthful; with more than 114 interns from institutions PAN India; on-boarded till date, it has enriched a many lives by infusing a great zeal to serve & the passion for teamwork.

Team Tammana works round the year  & round the clock.

To recognize & reward their tremendous efforts who serve the society tirelessly,  “ASHIA-9”, meaning Life & Hope – its annual event; is ‘a day for the team  & by the team ‘.
The motto of ‘less me and more we’ is reflected in the team work and the number of successful events & activities the NGO delivers year round  touching uncountable lives .

This Annual Award Ceremony & Celebrations is its 86th event were held on Sunday, 3rd September, 2017 at Chokhi Dhani, Panchkula which will also be cheered by the presence of RJ Meenakshi who has recently volunteered as the Brand Ambassador of the NGO in line with making a difference in the society with combined efforts. The common vision of helping people and spreading love is sure bring great results.

Of all the prestigious 7 Star Awards, ‘Tammanaite of the Year 2016-17’, the most looked forward to, every year was announced to Ms.Harvinder Kaur, whose zeal is unmatched & considers age no hindrance to serve & do your bit.

While the venue had the team members relishing the Rajasthani culture & dinner at Chokhi Dhani , they were also accompanied by their immediate family members. The cake cutting ceremony celebrated the success of 9 years waving it a goodbye while the lighting of the lamp marked the beginning of its 10th year .

Spotlight Awards were announced to Members-

The award ceremony also commemorated the efforts of the whole Team by giving out he experience accreditation to members completing more than one years, Graduated from Tammana by completing 3 years of service while there were the new post graduates at Tammana with 5 years of serving the society too.  The associates were also accredited including BK-37 as the Celebration Partner, Perfect Pixel Productions as the Photography Partner, India News Calling as the E-News Partner, Chokhi Dhani the venue partner.

Ms.Aakriti Gupta & Ms.Sana Sachdeva, from the Public Relations of the NGO, shared that the new Tammana tees that the team holds pride at staying uniform, were also released  at this special  occasion .

Ms.Isha Kakaria, the Founder of the NGO rejoiced the completion of 9 years by her brainchild, NGO Tammana  and expresses ” How any true ‘tammana’ in the heart can do wonders! All it requires is a first step to be taken with a never give up belief, come what may!” Her  dream for connecting the like minded to be able to collectively ‘live for others’ & spread unconditional happiness, definitely is inspiring.

Mr.Jaskaran Singh,General Secretary, who has also been with the NGO since its commencement got recognized for serving 9 years in the NGO , shared ‘As the NGO enters its 10th year, Team Tammana is all geared up  to work  with a greater enthusiasm, commitment & responsibility ! “

Mr. Vipul Vohra , Joint Secretary ; who was recognized for completing 7 years with the NGO, frames his  happiness on how Tammana being a small group of thoughtful citizens have succeeded in making a difference in the world & continues to do the same.

Ms.Amina Khan completed 6 productive years with the NGO too. Their immense contentment to have served the NGO for so long & continuing, is pleasantly clear.

Ms.Meenakshi Mahajan, Office Coordinator in line with also the other members of the team; finds very complimenting  to work with the NGO  & shares how it helps reinforce their faith in humanity.

With an underlining level of commitment of its team-members and a dynamic leadership, Tammana is all set to reach & touch a many more lives.