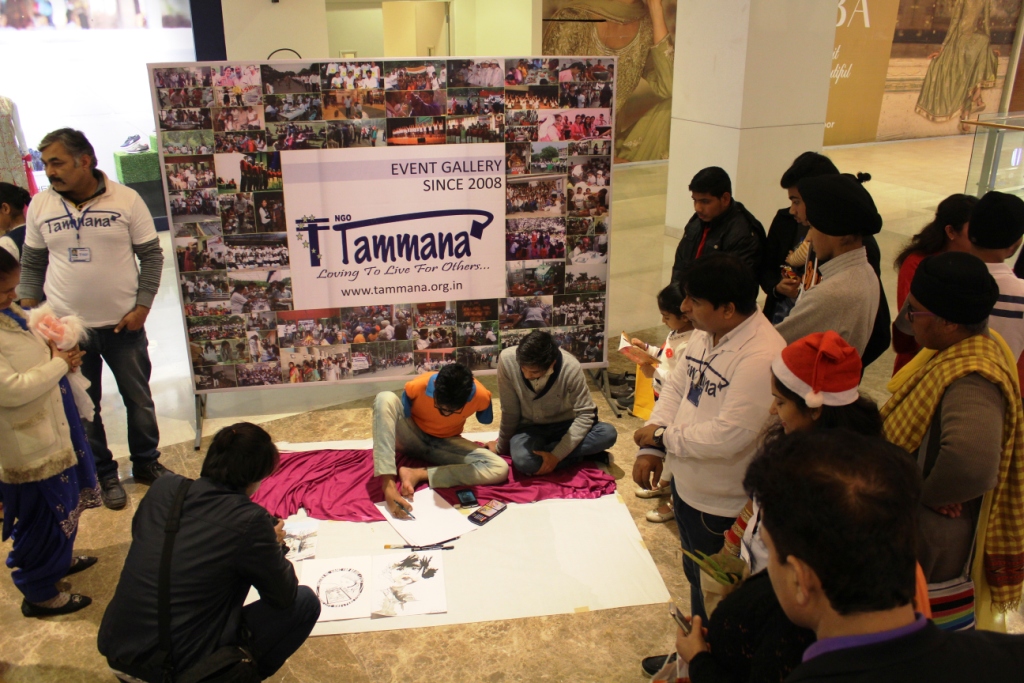 Tricity based ‘NGO Tammana’ added another feather in its cap on completing 100 months of serving the society in December. The NGO commemorated this achievement by hosting its 75th Event ‘100 Not Out!’ on 25th December, 2016 between 4pm and 8pm at North Country Mall, Mohali.

The State Awarded & Registered, NGO Tammana was founded by Ms. Isha Kakaria on 1st September, 2008. Since then, under her guidance, the members of the NGO have diligently served the society with a smile.

This event not only marked NGO Tammana’s 100 Month Anniversary but this Diamond event was one of its kind. It provided a wide arena for community participation. The event was an amalgamation of the work the NGO did round the year. The event was full of cause based activities and entertainment. ‘Tammana’ invited various guest groups, associates and regular in-kind donors from over 100 months who along with Tammana had a made a difference to the society. The public at large was a part of this event.

The 100 Month Anniversary promoted the inception of clean and green environment by free distribution of 100 saplings for plantation to the general public and the same number were distributed to the team members to promote NGO’s motto of ‘Go Green’; in association with the Forest Department, Chandigarh.

Throughout the year, the NGO works for the upliftment of residents of various orphanages & shelter homes like that of Chandigarh, Guru Aasra Trust in Palsora and Manaana, Samarth in Sector 15, Ashreya Home in Sector 47 and Kartar Aasra in Sector 1, Chandigarh. This event witnessed the participation of all these children from these organizations who not just enjoyed the event but also a tour to the mall too. As ‘Tammana’ considers spread of education as an important objective; 100 books were collected by the members and distributed to the children at the event.

Mr.Gurjot Singh Kaler, DSP,Mohali graced the occasion with his charming presence. Special counter with informatory boards was set up to sensitize all upon Traffic Awareness & increasing road accidents. Various other counters were also set up, for awareness on eye (provided by PGIMER) and organ donation (provided by Fortis Hospital), drug de-addiction, aids control etc. The NGO’s contribution in the field of health promotion has been remarkable over the years, and to help continue the same, educational material in form of 100 booklets from each counter was also be distributed to spread awareness on these issues. 100 Forms each were available at these counters to help pledge & know more about these causes. 100 Free Bands were distributed to spread the awareness.

The event shone with ‘100 smiles’ brought on different faces by Tammana in the 100 months, displayed as a collage with 100 pictures. Photographs from 100 months of work in the past were celebrated at Tammana’s wall of fame. Adding to the spirit of Christmas was Santa Claus, distributing sweets & played children play games & dance during the event.

Along with these, Tammanites believe that every act of kindness counts and thus the star attraction of the event was the “Zinda Dil Awards” which honoured people who had been an epitome in serving the society in any form. Open nominations were invited from the city and around by #TeamTammana.

Ms. Isha Kakaria when congratulated for the successful delivery of this herculean task praised the efforts and hard work of Tammana’s efficient team. “The team’s motto of ‘Less me and more we’ had made all the difference throughout the years”, she commented.

‘Tammana’ manifests the idea of doing things with great love. This ‘Diamond Event’ in the 100th Month propagated this idea strongly & beautifully.