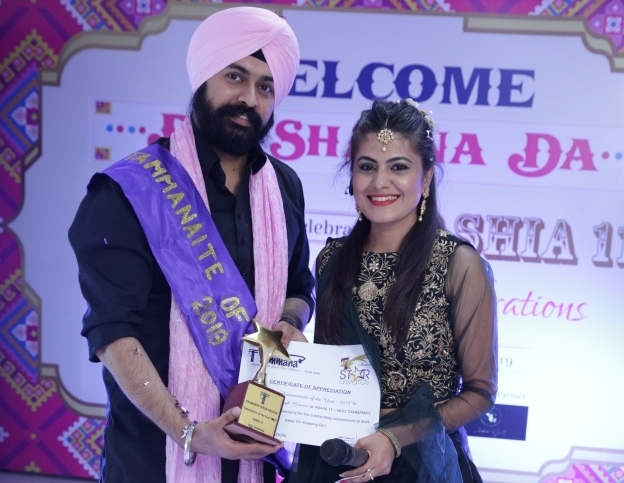 Keeping up with consistency, NGO Tammana organized its 11th Anniversary Celebrations naming – #Ashia11 ; meaning life and hope. The theme of the event was given to be Din Shagna Da, & to celebrate its grand and remarkable journey of auspicious 11 years of community service, everyone was dressed in the traditional attire. The event was held on 1st September 2019 at Hotel Pelican Inn, Zirakpur.

The Annual Award Ceremony is held every year to acknowledge the efforts of the team members, specially those who outshine the rest.

The event started with the customary lamp lighting ceremony followed by the National Anthem.

The Founder President Ms. Isha Kakaria, addressed the audience and shared about her journey, thanking every member, volunteer, intern, associate, and media personnel for being a part of this collective vision.

The Award ceremony started with the ‘Intern of the Year 2019’ award which was presented to Ms.Simar Kaur Mattewal. This was followed by the Experience awards. It included 8 members who completed 1 year and 9 who completed 2 years with the NGO. 2 Members Graduated.

With their unmatched zeal and commitment for excellence, these pillars of strength of the NGO were presented with experience awards. It Included 1 for completing for 9 years and 1 for 11 years!

“Project Yakeen” the newest Initiative of the NGO where the Government School , Village Singhpura, in dire need of attention has been adopted by Tammana ; was marked by the cultural performances by the children of the same school that moved the audience. Children were presented medals & certificates upon their first ever such performance. The children recalled their dance practices as great fun.

The evening was followed by honouring the associates of the NGO.

Therafter, the cake was joyously cut by the team.

The highest category of awards for the night was kept for the “7 Stars” of Tammana. The logo of the NGO shines with 7 stars which depict the prestigious 7-star awards and its importance.

Prabhjeet Singh Grover was presented with ‘Tammanite of the Year 2019’ award for unmatched performance throughout the year.

Kriti Thakur was presented the Superstar Award 2019 for an awe-inspiring performance & service.

Refreshments were served and a special performance by the Team members for the audience added to the beaming celebrations.

After the awardees group picture and team picture, the members let loose and danced their hearts out on the tunes of the DJ. The team is all set to bounce back with greater motivation, higher spirits, enthusiasm, and commitment for its next term.